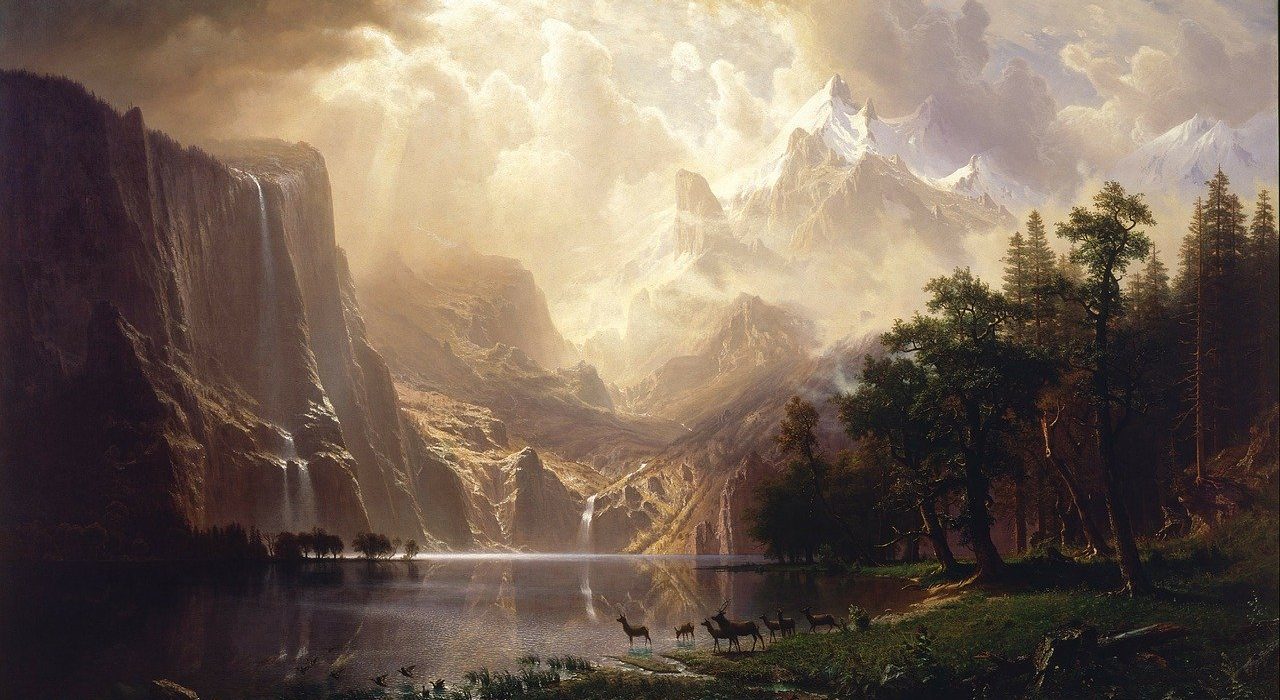 When art historians speak of “nature”, they usually do not mean nature in the ecological sense. In the context of art history, the phenomenon rather means the externally visible reality. To work ‘according to nature’ does not necessarily mean that you paint a tree. It can also mean sitting on an industrial site and painting a blast furnace. But you have to be physically ‘outside’ and have the blast furnace in front of you in a material, ‘real’ way. (The classical contrast to ‘nature’ is accordingly the studio).

For a long time, the highest goal of art was considered to be to represent visible reality as ‘correctly’ as possible

Even today, laymen occasionally judge the “quality” of art by how well a painter knows how to depict what he sees in reality. A portrait, for example, should above all be recognizable in this view, then the artist who created it is ‘good’. (In reality this is a craft category, not an artistic one).

In fact, there was a time within the now more than 1200-year history of Western art (note 1), in which it was the primary goal of artists to depict reality as realistically as possible, i.e. to imitate it as closely as possible on their panels and canvases (technical term: mimesis). This endeavour was significantly encouraged by the development of the technique of oil painting and by the invention of the rules of vanishing point or linear perspective (also called central perspective). Both took place in the early 15th century. The first is usually associated with the name of the brothers Hubert and Jan van Eyck (which is historically not quite true), the second was done in Italy by the architect and mathematician Filippo Brunelleschi.

Paintings like this depiction of Mary with the Child Jesus, probably painted in the middle of the 15th century by a student of Robert Campin, not only show the artist’s mastery of the new technique of oil painting (note 2), they also bear witness to the extent to which the new possibilities of this technique encourage the artist to observe his surroundings closely and ever more closely. Even in the previous century, artists had largely concentrated on the theological content of their paintings. They had used aspects of the technique of painting as a way of imitating nature – actually: reality – only in exceptional cases.

This can be well observed, for example, in the so-called “Glatzer Madonna”, which was created around the middle of the 14th century: the depiction is entirely concentrated on the enthroned Madonna crowned with a large crown and her huge throne, which they – Mary – interpret as “Solomon’s throne”, as “seat of (divine) wisdom”, ultimately, therefore, Mary as throne for Christ, the ‘new Solomon’. The architecture of the throne as well as the angels, lions and not least the small figure of the founder at her feet are not specifically addressed by the painter, they are rather marginal phenomena. Artistically, they do not fascinate the viewer in the same way as the numerous details in the work of the successor to Campin.

It is easy to attract the attention of the observer and to arouse his admiration that it can easily happen that the actual, theological meaning of the picture is overshadowed by the fascinated observation.

The only exception in the case of the glittering Madonna is the back of the throne on which Our Lady is seated. The striking structure is thought to suggest cedar wood, which the research suggests is probably a further theological reference to the construction of the temple by the legendary King Solomon, where the precious, golden shimmering cedar wood played a major role in combination with other valuable materials.

There is, for example, the golden chalice which is on the chest of drawers on the right side of the picture. There are different types of wood, such as that of the chest of drawers, the bench behind it, and the window shutter, which so strikingly attracts the eye and directs it through the window to the city in the background. There is stone, with which for example the fireplace is bordered. There are various fabrics that wrap Mary’s garments or objects in the room and are almost invariably shown in a clearly exaggerated drape; there is even soft-looking fur with which Mary’s garment is trimmed on the arms and which apparently even serves as lining for the entire upper garment of Our Lady. Last but not least, there is the skin and hair of the depicted persons and the precious book with its parchment, painted and written pages. There are embroideries with gold threads and precious stones on a border on Mary’s robe.

And last but not least, there is the strange, obviously braided umbrella that has been moved in front of the fire in the fireplace so that no sparks can fly into the room (incidentally, above the umbrella there is also a very small piece of the fire itself – the depiction of a blazing flame is perhaps the most difficult problem within the technique of painting that a painter could face and therefore occurs only very rarely or, as here, in very small details).

At this very point, however, the revolutionary newness of this new type of painting becomes clear, a phenomenon that has perhaps been encountered for the first time in the history of art since the time of the early Carolingians (8th/9th century), but which in a way makes clear the path of art to itself, a path of the unstoppable emancipation of art from the hitherto self-evident enslavement by theology and cult.

The revolutionary newness of this new kind of painting

The so-called Early Dutch, to whom Robert Campin’s successor, who painted the “Madonna in front of the fireplace screen”, belonged, had thus decided to reproduce what they saw – ‘reality’ or, as the art historian says, ‘nature’ – as far as possible exactly as they saw it. This applied to textiles as well as to other materials, even if this was strictly theologically irrelevant and thus without immediate relevance to the (thological) message of the picture.

This decision, however, had consequences that went further than the artists themselves might have expected. For it meant, conversely, that from now on things that did not exist in ‘nature’ could no longer be represented!

When we then look at the glittering Madonna, there are not only the striking differences in size, but also, for example, the nimbuses that mark Christ and Mary as holy. Among other things, these two features that are visible in the picture deviate from ‘nature’: they do not exist there.

Masaccio, who was probably the first to transpose the rules of vanishing point perspective developed by Brunelleschi into a painting (Trinity, 1427; Florence, Santa Maria Novella) and thus caused a sensation, still understood nimbs or a halo quite materially as a golden disc behind the head of the person in question and even subjected them to perspective foreshortening, which sometimes led to curious results, as can be seen for example in his “Zinsgroschen” fresco in the Brancacci Chapel in Florence.

The Early Dutch, however, drew a different conclusion: halos are not visible in nature. Jan van Eyck, one of the earliest of the Early Dutch, interpreted them at least as a glimmer of light or a halo of rays and hinted at one by showing rays of light behind the head of the saint he depicted.

But the Campin follower, who painted the “Madonna in front of the fireplace umbrella”, went further: With him neither the Blessed Mother nor the – by the way, unusually childlike looking – boy Jesus gets such a really non-existent halo.

However, he then quite obviously became afraid of his own courage. After all, he broke with a tradition that had been going back for centuries. To depict a saint without a halo might appear to him as all too brave, if not as a sacrilege, which would entail the furious protest of the pious onlookers or worshippers and perhaps other consequences for the painter.

He positioned the umbrella, which was superficially supposed to protect Mary’s parlor from the flying sparks, in such a way that it came to stand exactly – i.e. not approximately and thus coincidentally – behind the Blessed Mother and in this way optically took on the function of a nimbus. Thus, on the one hand, he does not represent anything that cannot actually be seen with the eyes of the flesh in ‘nature’, but on the other hand he still distinguishes the Blessed Mother optically, as if she had a nimbus!

This type may have to do with the growing interest in ‘realistic’ representations of the Virgin Mary, which was awakened by artists’ ever closer observation of reality.

The successor to Campin, who painted Our Lady in front of the fireplace, in his quest for a realistic representation, even went so far as to show the blue veins visible under the skin of Our Lady’s bared right breast, as well as a drop of breast milk coming out of the breast.

On the other hand, against this background it is noticeable that the boy is already much older than a newborn. But the artist does not depict the scene of the birth of Christ either. And also Mary’s clothing does not correspond recognizably to the historical circumstances of Mary’s life. The recognizable effort for a realistic representation does not yet include the historical-critical view of history, which was only to develop in the course of the Enlightenment.

In one respect, however, this painting is truly innovative: it no longer depicts the theological content of history through symbols and metaphors, but it claims to show the world – ‘nature’ – as it actually is to be seen. With it painting steps a little bit far out of the enslavement – one may also say ‘teasing’ about it – of theology and raises its own claims, to which the theological statement must in a certain way fit in. Symbols and metaphors, the actual, theological content of a painting, become more difficult for the viewer to recognize in this way, but the art of executing such a work takes on a much higher rank from an aesthetic point of view.

This is a further, fundamental step of art on its way to independence, at the (provisional) end of which, sometime, century later, it wanted to see its value only in itself (l’art pour l’art). However, this also includes the fact that by then the old, Christian world view had collapsed and no new, binding one had taken its place.